Stick or twist - What next after 'Trusty Steed' Kevin?

Bahnstormer_vRS wrote: ↑Thu Jul 22, 2021 4:21 pm I was out and about this morning and decided (well I'd planned) to pop into my local BMW / MINI dealership to take a good look at an X1 (blah) and Countryman (maybe, not ruled out). No test drives as I was using up a free hour before lunch, having been out for a haircut.

Overall the X1 is too rounded / not sharp enough looking for my preference; sort of just another car; nothing distinctive about it. Boot is reasonable for Davie or a wheelchair on the Community Transport volunteer driving I now do, although I'm not keen on the sloping back.

The Salesman, suggested and showed me a curved ball; a new X3 on which there are potentially good deals to be had as there is a new model due out later this year. More my style of car BUT its massive and certainly bigger that I want, need or wish to pay for. I'll pass on both.

The Countryman? Much better prospect.

Nice and boxy and chunky. Boot is near identical in size to my Yeti's boot and driving position seems fine enough; although I didn't like the 'oval digital instrument binnacle' mounted on the steering column, it moves when you move the adjustment of the wheel (a bit like having a small tablet perched on the steering column). Moreover the digital dash was not level,being obviously canted over to the left.

I'll give that the benefit of doubt and take a further look at some stage as the Dealer has a Countryman JCW within Group, that will be available to test drive. 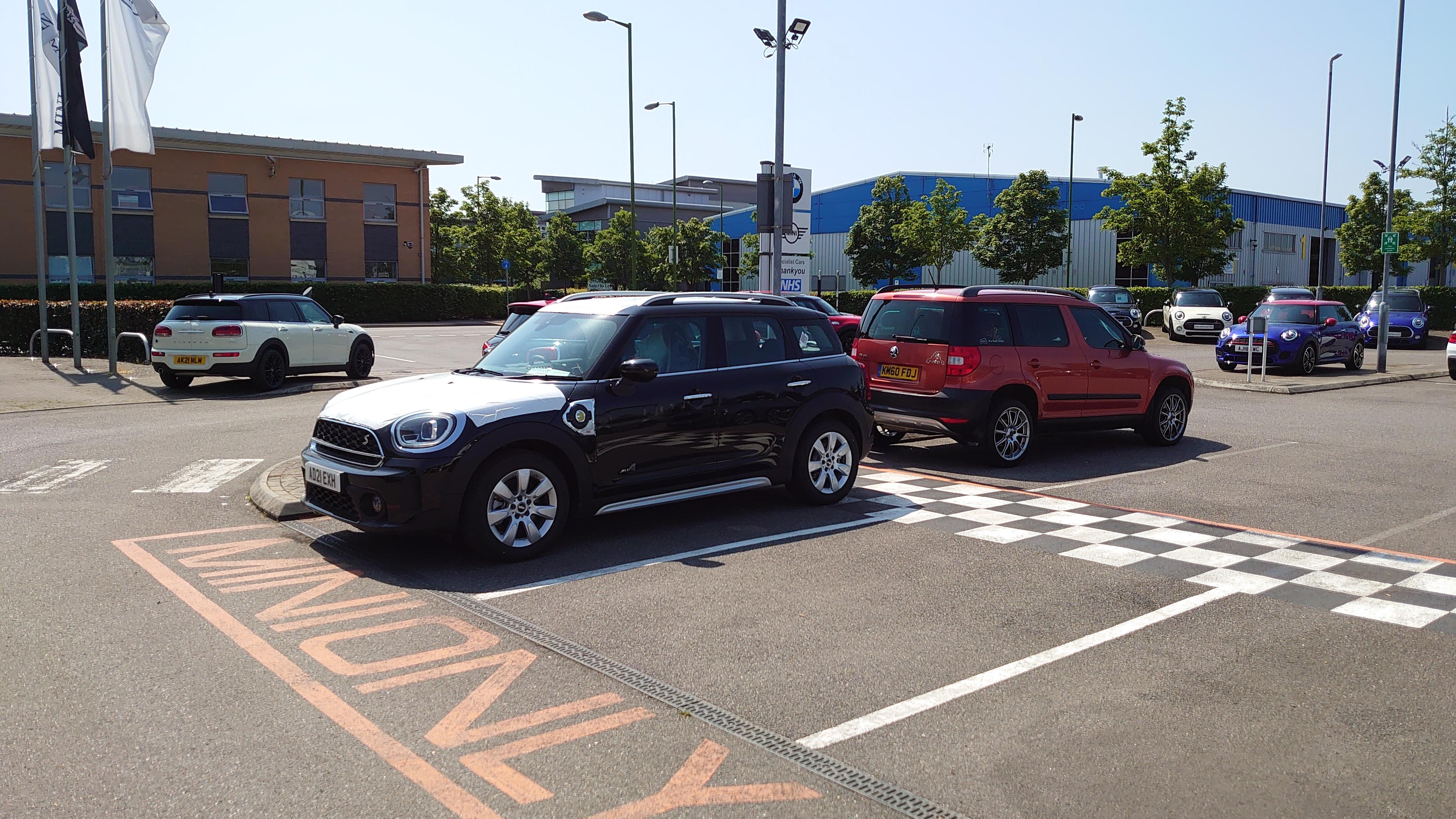 Next Dealership visit will be to check out the Volvo XC40; probably sometime next week.

I purchased the Mini Countryman hybrid (in your picture, I can tell by the charge port) this past April and love it (viewtopic.php?f=4&t=23245&hilit=minis&start=780). The battery needs to be charged often as it is only an 18 mile range, but for my needs and driving habits it suits me fine. I also test drove the XC40 Recharge which is a superb car, but the Mini was more appealing to me aesthetically and more fun to drive.
Best regards,
John
Top

I drove a Countryman many moons ago a don’t recall it feeling that big. I’m surprised to see it looking so large against Kevin
Top

Kansas City Milkman wrote: ↑Fri Jul 23, 2021 4:30 pm I drove a Countryman many moons ago a don’t recall it feeling that big. I’m surprised to see it looking so large against Kevin

I reckon it, the Countryman, looks large for two reasons;-

1. Perspective, as it is nearer to me and

2. As with all cars with new models it has grown over the years. One of my neighbours has a '64 plate Countryman and it is certainly smaller than the current one.

Overall, the current Countryman is pretty much the same size as Yeti. Its a bit lower and maybe looks bigger as the corners are more rounded / plumped out.

I've been mulling things over during the last few days and am erring toward the 'Stick' option for another year or two . . . ..
.
. OR . .
.
.. . moving sideways to something like the Estate version of an Octavia vRS / Cupra Leon / Focus ST - they seem to offer better value for money / lower outlay, and possibly better residuals, than an SUV.